“It was in our backyard, in 1962. My parents were farmers, one day they needed headposts for our vineyard, something strong and durable enough. Here in our area, in San Michele di Piave, you can find plenty of sand, pebbles and stones from the Piave River, so I said to myself, why not try to make a concrete pole using local raw materials? And then we started...”

Mr Gianni Spinazzè explains this way the beginning of our company business, back in the mid Sixties. After more than fifty years of activity Spinazzè is now one of the most important companies in the agri business in Italy. 1962 was a crucial year, it was at that moment that the first idea came into Gianni Spinazzè’s mind. The years before the company’s official registration have been dense with expectations and new ideas in an economy that was eventually taking up in Italy as well. Gianni leads us through his memories: “the first mould was made of wood, by a local carpenter, here in our village, we were just making a test”.

The very first poles were conical, the base was 10 cm and the head 8 cm, for better inserting them into the soil. They were four meter long, very strong, made of sand and pebbles from the Piave river and an inner rebar reinforcement  – steel cable wires woud come only a few years later.”

Pebbles and sand were delivered every morning by Sigirfredo Masier, a local carter who came with his cart pulled by a horse, filled to the brim.

At that time, in the countryard around the city of Treviso, all vineyards were trained after the “Belussi” system, which had been invented right across the Piave river, near San Michele. This system required very tall and strong poles which were able to sustain four vines each, weighing 80 kg each.

A further technological improvement came in 1964. This time a great contribution was given by the local blacksmith, Mr Costante Bonotto. He was commisioned to make a four meter long mould set. In this way the headposts became even stronger than before and was produced faster. 1965 was a turning point for the rising Spinazzè: the company was officially registered at the companies registration office in Treviso. Right in that year Spinazzè started producing a smaller pole, more suitable for vine training in rows. The pole was a predecessor of nowadays 7×7, the head was 6 cm thick and the base 8 cm, for around 30 kg of weight.

The pole’s outline was rounded. In the Spinazzè’s backyard poles were produced using a ten poles mould set. They were then left drying on the ground and afterwards lifted by hand and put on the truck: the old “Tigrotto” (“Little Tiger”) was delivering in the whole province.

Between 1967 and 1968 the rising market reached the hilly vineyards of Friuli and even further up to Slovenia. The business was growing and a new bigger truck was bought. The space in the family’s backyard has become to small, a new area was needed for installing the first real production line. But where to go? It was at this point that an unexpected help came from the village’s old teacher. She was the owner of the plot of land right behind Spinazzè’s family house. She liked the young guys who were working so hard day and night, she wanted to help them, and decided to invest on them. The old lady selled the plot at a very convenient price and just said: “you will pay me when you have the money, no hurry…”.

The deal was signed, and Spinazzè had its first factory plant.

The first production line was made by MIBA mechanic workshop in Milan and installed in 1970. At that time steel braids were used in the construction business as a reinforcement for beams. Spinazzè started using them in the concrete poles as well in order to make them more elastic. The production line was working day and night, seventy meter long poles were produced and then cut using a carbon disk. In 1973 a new contract was signed with EIL consortium in Bolzano and two more production lines were installed in the following years. Thicker poles were produced in order to satisfy apple growers’ needs in South Tyrol.

In 1978 a new important contract was signed: 650.000 poles to be produced in a few years for a plot in Villa Banfi at Montalcino in Tuscany. Mr Spinazzè remeber driving back from the meeting at night with only one thing in mind: producing those poles, working day and night for as long as needed. In the following months twelve workers made night shifts and trucks coming from Tuscany loaded poles every week. The first 150.000 poles were produced in a few months. And the rest was dispatched in the subsequent years. Spinazzè finally became a trustable factory business which was able to respond to bigger client needs with a market that had expanded to all Northern and Central Italy. 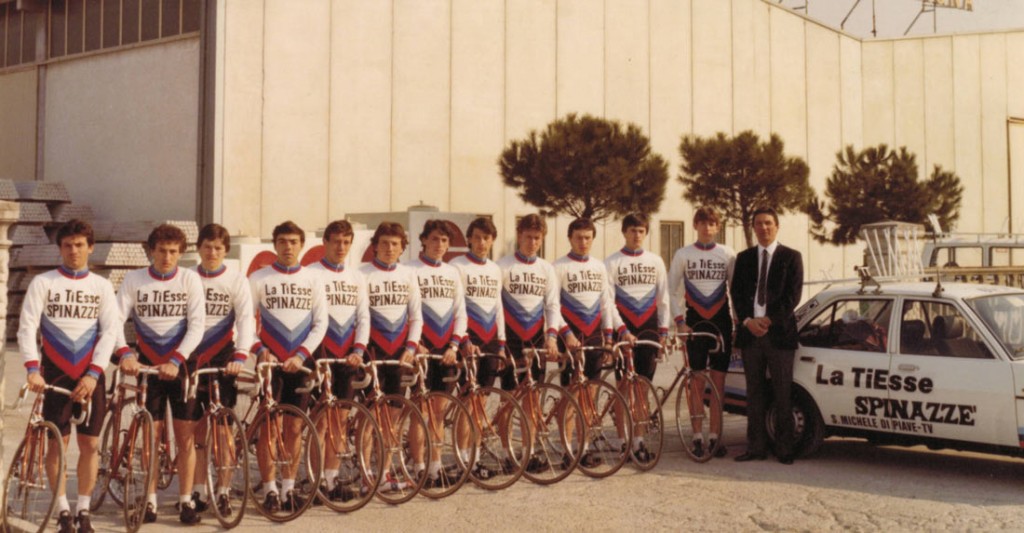 Spinazzè has always been bound to sports, especially cycling. In these years the company sponsors his own cycling team, in cooperation with TiEsse, another local factory.

TiEsse-Spinazzè team win many competitions including two italian championships, making the headlines every weekend. Cycling was and still is very popular in our area; every week farmers supported the team and then… came to factory to discuss the last race and get some advice for their vineyards.

The production continued during these years with some pole sections improvement: 8×8 Poles were upgraded to 8,5 x 8,5 with a stronger reinforcement. New poles with six braids guaranteed higher elasticity.

The Nineties brought great innovations in agriculture, especially as far as mechanization is concerned. New poles with rounded profile and new steel accessories for vineyards were developed too.

Thanks to new internal investments modern machinery were installed in the factory. The market was expanding in southern Italy, especially in Abruzzo.

At the end of the Nineties the importance of internationalization started to emerge. The Italian market was slowing down while the first anti hail structures were installed here and there. The company was looking for new partners and started cooperating with agronomists and installators even outside of Italy.

Mr Robert Spinazzè had just entered the family business and was trying to understand these new market developments. The first trips abroad began at that time. Will this be a good choice? Is this the time to find new clients abroad? The answer came a few months later and Spinazzè started exporting in northern Europe, developing a strong partnership with Van Nifterik in Netherland which is still working today.

At the beginning of the two thousands a new synergy started with Austrian Fruit Security a service provider for fruit growers specialized in covering structures for orchards. The partnership has worked very good since the beginning and new markets opened in Eastern Europe, towards all those countries starting to invest in the fruit growing business.

Starting from Poland Spinazzè then moved to Ukraine, Russia, Kazakistan and Turkey. Among the most important projects developed with Fruit Security “Delta” project in Serbia (100ha) was a remarkable one and then “Alm” and “Sad Gigant” in Russia. Afterwards the important “Nemiroff” project in Ukraine, entirely managed by Spinazzè.

Today our company is travelling along the streets of the world cycling tours thanks to our partnership with Tinkoff Saxo.

Today Spinazzè is working all around the world. Logistics department is very important for dispatching poles worldwide. New markets like South America and Canada are now appearing at the horizon while the historical bind with local wine growing business is stronger than ever.

Since 2015 Spinazzè have gone back to the never soothed passion for cycling. After supporting Tinkoff pro Team we are now official partner of Bora-hansgrohe, one of the leading cycling team in the world tour. A new path toward our clients, along the streets of cycling, as always.