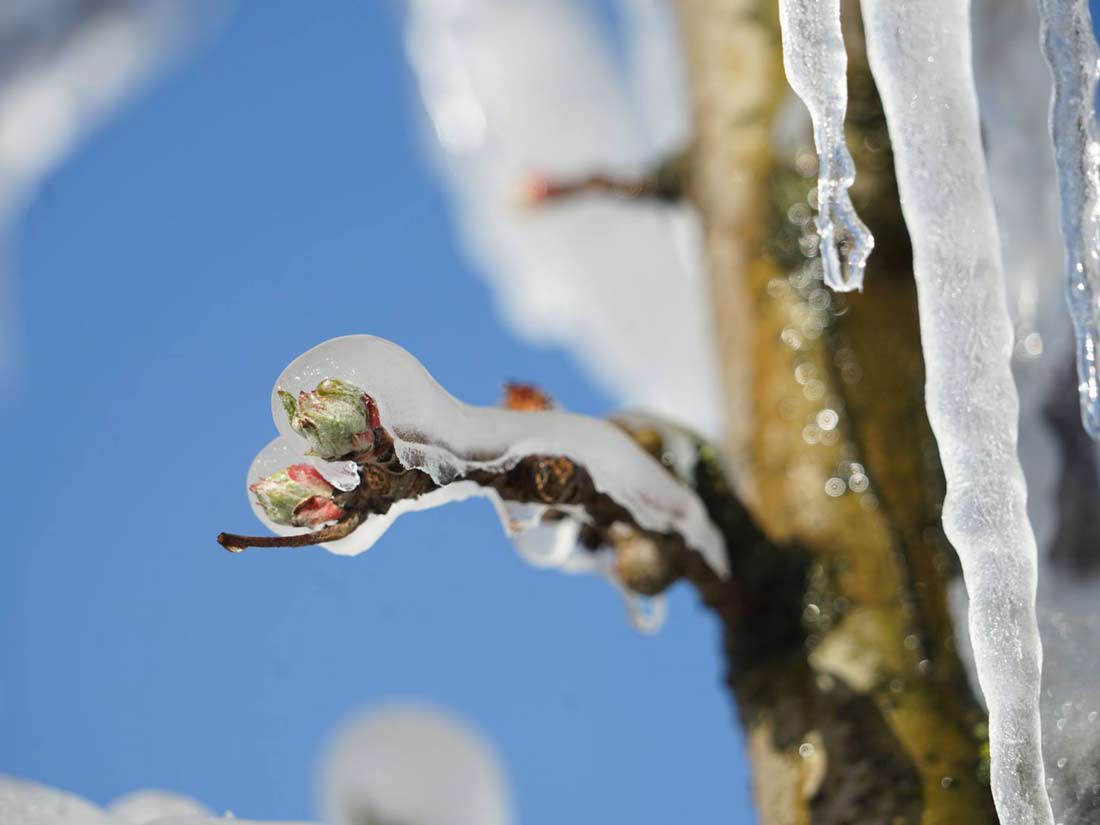 Austria and North-Eastern Europe are suffering a freezing spring that is threatening many orchards. Here is how you can save flowers by anti-frost irrigation.

April is one of the most sensitive months for farmers that attend to the blossoming of their orchard trees worrying about possible frost. Austria and Eastern Europe in particular have been dealing with a mass of frozen air that can bring night temperature 10 °C below zero with the risk of killing the buds.

A few weeks ago Biohof Schloffer farm, a client of our partner Fruit Security, published on social media many suggestive photos showing this new frost-protection technique aimed at protecting the plants in an area where night temperature was reaching -4°C. This is not an extremely low temperature yet it can be enough to ruin the buds. Damage due to frost range from low quality of the harvest to the complete or partial loss of production.

There are mainly two different kinds of frost,

The first one is called Windy Frost or Black Frost. It happens when a mass of cold air moves towards an area bringing the temperature down below zero. Wind speed is usually higher than 8 km/h and it is very difficult to protect against this kind of frost.

Radiation frost, happens when, under clear sky and low wind, temperature close to the land’s surface goes down below freezing point. As temperature lowers, the cold air flows down where the most part of damage occurs.

Many efforts have been made to come to a solution against this kind of frost in order to alleviate damage caused by low temperature. Many different methods have been employed, including candles, air fans, helicopters. Irrigation sprinklers are now the most effective solution in most cases.

Over-head irrigation is a very common practice in anti-frost protection systems. It employs pulsating sprinklers to irrigate tha plants and the soil entirely. Homogeneus distribution of water is important in order to prevent damage. In most cases, the sprinkler is installed 30 cm above the upper part of the tree in order to prevent vegetation from blocking the water spray. This is the conventional complete cover method which, when appliable, guarantees excellent protection and is the most common and safe solution against frost.

Micro-sprinklers allow to direct water towards trees with a small percentage watering between the rows. Usually every tree has its own micro-sprinkler installed on top.

On the other hand one of the bad sides of this solution is the possibility that water freezes inside the narrow pipelines carrying it to the micro-sprinklers. The flow speed will determine the freezing point. Therefore it is very important to set the proper dimensions in order to make this anti-freezing system work effectively.

The great advantage is that the quantity of water needed for this system to operate is far less than the traditional irrigation systems. In case of wall crops, the distance between micro-sprinklers is set in order to provide a continuous water spray over the whole line, therefore providing an effective protection. This system can save a great amount of water and can reduce the misfunctioning of traditional pulsating sprinklers, lowering the costs.

This type of irrigation system, thanks to the Flipper system, limits the water use and allows to protect a wider area, without pouring water between the line. The main goal is best precision, aimed at trees only, avoiding roads and between-lines.